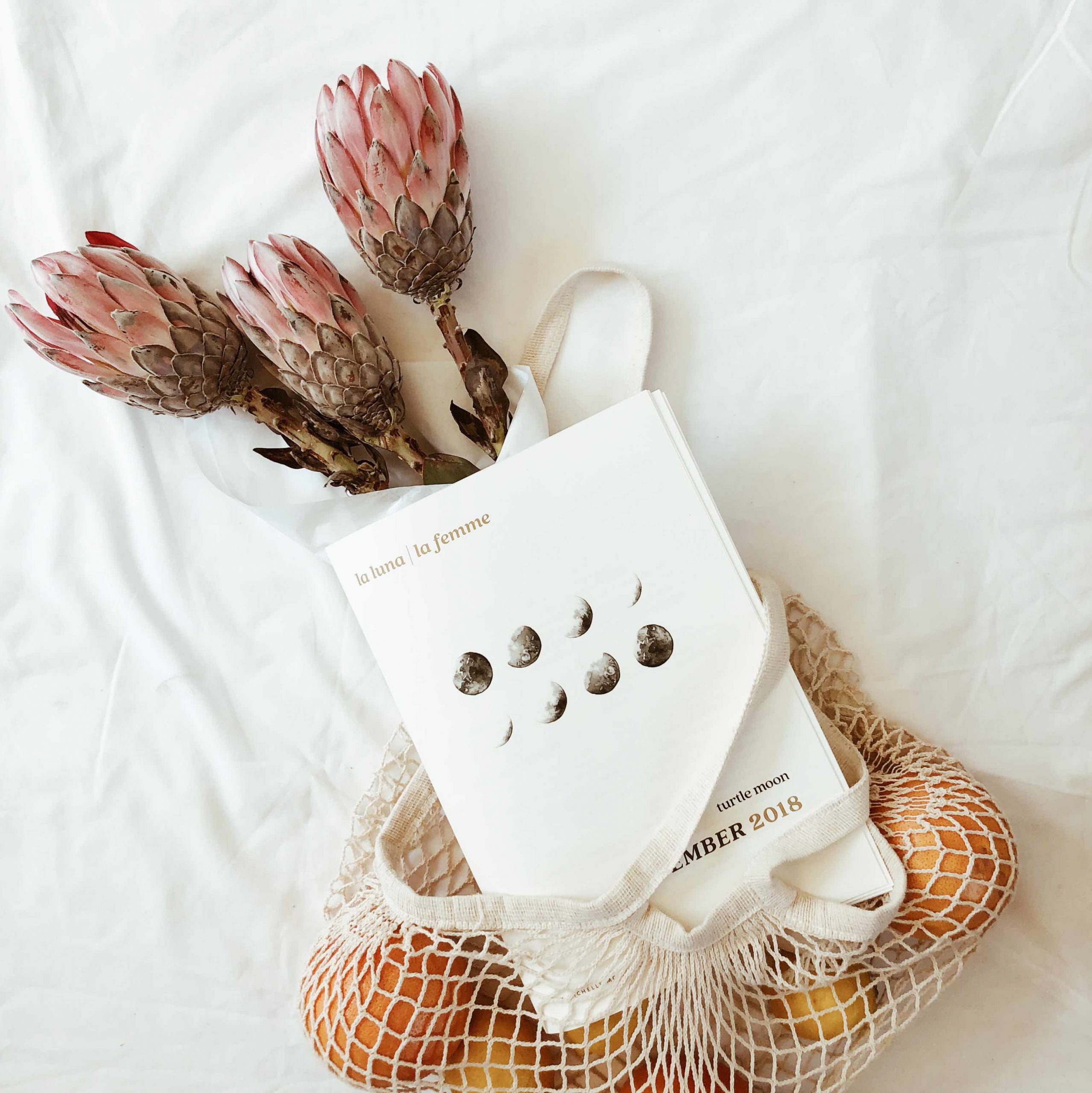 Hello lovelies and welcome to my pretty new online space! I’m completely in love with the new digital digs Nicola Tweed has set up for us here at We Are The Wildflowers and I’m so excited to share that the beautiful La Luna | La Femme Moon Journals I have been working on for most of this year will be housed on this site – you can find them at the shop, which will, of course, still stock my plant-based lifestyle book, A Guide for Wildflowers. A few new products are launching soon so keep your eyes open for those too.

If you follow me on Instagram you may be aware of the journey I have undertaken this year in creating La Luna | La Femme. Since I fell pregnant and had my baby girl, my eyes have been opened day by day to the magical beings us women are. There is nothing quite like growing a human in your belly for nine months, birthing said human, and then nourishing it soley with your own mama milk for months and months, to make you fully appreciate the power and strength of the female body. Add to that the incredible intuition and mental endurance that comes with being a new mother and you have a potent mix of dayyummm girl, how did I not know that women are this powerful?  I mean, I had an inkling before, but not on this level.

My period returned three months after my birth and, to be honest, I was a little shook that my body was so ready to procreate again – because my mind was one hundred percent definitely not! Although I had been off birth control and using the cycle tracking method without any unplanned pregnancies for about five years, I decided to start tracking my cycle seriously – and not just checking in with an app now and then to check if I was in the fertile window. I started keeping a journal and researching more into the female menstrual cycle… I had forgotten so much of what I had learnt in Mr Clarke’s biology class back in standard nine! I read books, listened to podcasts, joined Facebook groups and even signed up for a Hormonal Harmony course. Through this research, I became more and more exposed to information about the connection between the moon and women’s menstrual cycles. I quickly learned that I was a little different to (most) other women as I bleed with the full moon, not the new moon (which means my body follows a red cycle). I dug further and read more and more about working with the moon cycles and also, rather tentatively, began to hold my own new moon and full moon ceremonies. I started tracking the moon phases with the cycle of my body and began to see connections and patterns emerging around certain days of my cycle.

Before long I was reaping the benefits of my new moon intention-setting – trust me, even this new website being here and the creation of La Luna | La Femme, were all once a series of tiny little intentions – intentions that grew and manifested and here we are! Call it woo-woo, call it plain old goal-setting or living intentionally, but it was working! A session with my astrologist, Michelle McClunan, and a coffee date with a friend which led me to reaching out to designer and illustrator, Amy Keevy, were two big moments this year in the creation of La Luna | La Femme and also… a new me. A Keri who is now a mama. A Keri who is still a writer. A Keri who is, and always was, a creator. A Keri who is whatever she says she is.

I chopped all my hair off on Tuesday – a couple of days after I had sent Nicola all the images to be used on the website… probably not the wisest idea for a website relaunch, but in that moment, I just felt that I so deeply needed to. My friend, Gemma, sent me a message saying “cut it off! All that dead, old stuff – get rid of it.”  It felt so symbolic – the final nail in my coffin of playing small. I hadn’t cut my hair since Imogen was conceived two years ago… two years that have been the most life-changing and transformative time for me and I’m so grateful for it all… it’s made me grow and soften and harden in so many ways. It’s opened my eyes. It’s made me know love and appreciation, not just for my baby and husband and and family and community, but for myself. Every bleeding, hairy, wrinkled, saggy, tough, grumpy, happy, creative, quiet, loud, intelligent, angry, loving bit of me.

I want to help women to truly appreciate their bodies, to harness the power of the moon’s phases to set their own intentions and bring abundance into their own lives – without necessarily have to go through pregnancy and child birth, as I did, to get in touch, and be in awe, of my body and inner power. My dream is to write a new story for all young girls and women; a story in which their bodies and emotions and innate wisdom is celebrated, rather than numbed and conformed to fit into a masculine, capitalist world. I want to give women the permission to love themselves and to know their bodies and minds well enough to know when to harness their power and make big changes, and when to retreat and re-energise. I really believe that we would have so much less anger, pain and hatred towards ourselves and others if we simply gave ourselves the permission to tune in, and work with, our feminine being and energy, rather than against it. We could change the world. I’m changing mine, every day.

To start getting in touch with your body, tracking your own cycle and working intentionally with the phases of the moon, head on over to the shop to get your November Moon Journal now. 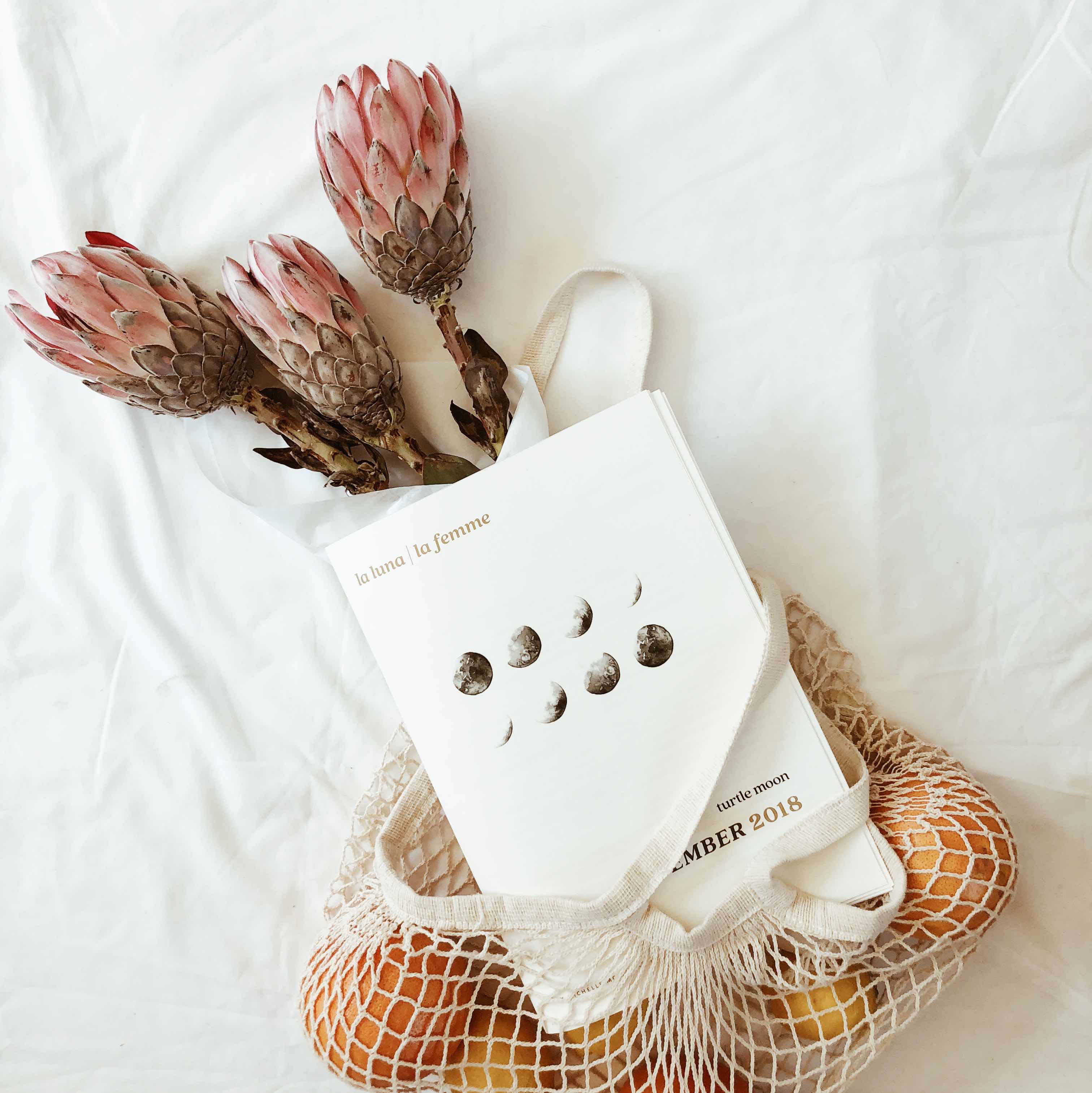